I started being fascinated with how people can be capable of making such… Things when I received the ZDNet update that contained the article of the crude all-in-one that George Ou had built.

Actually, I don’t think it’s so crude. From the front, as in the picture below, it’s actually pretty sleek-looking.

Sure, if I’m the kids’ mom, I would worry about how they might get electrocuted if they touched the parts in curiosity, but it’s actually a pretty cool thing, if you had the time and patience to put it together.

Next up, the treasure-chest iMac.

I had been trying to find the George Ou article up on Google, and this came up in my search. I just thought it too cool to pass up, that I had to blog about it, too.

When I read how he built this out of a $25 iMac that he just took apart, I was speechless. That is almost stealing, in terms of computer prices, haha! But since he had to buy RAM and a hard drive to complete the mod, then I think that that price was fair.. But still a steal!

And lastly, the MacBook mod. Had I been more brave and gutsy, I would seriously consider building a two-tone MacBook. I mean, what’s more seductive to a geeky gurl-slash-foodie than something that reminds her of choco/milk dessert?! (Chocolate mousse, Black Sambo, etc.) 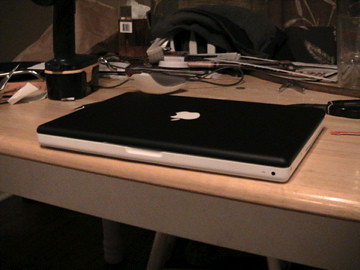 It’s amazing how Cooper vanRossum turned his hardware disaster into something so terribly sexy as this.

If I had Sayuri run over by a truck (God forbid), I will then have the license to fool around with her innards. Heheh. But first, I have to have a tutorial. Wouldn’t want to wreck her completely like my dad’s old laptop.

So while these guys have all the gumption to build these, I would have to cower in fear of wrecking my baby, since she’s the only one I have for now. I will have to restrain myself from the need to clean her keyboard, even if I had turned obsessive-compulsive on November 2, constantly checking on the keys’ edges and scrubbing them with a used toothbrush.

Though I found articles on how to pop out MacBook keys, I will not, I will not pry/pop/force them out to clean. I would rather have a dirty keyboard than a wrecked one, thank you. Unless, by then, I’d have a Sayuri replacement. In which case…

*Pictures are copyrights of the respective people/websites I linked to: ZDNet, Wired, and Glen Bowers.