Well, enough pre-article banter. Read on for my experience with and addiction to… Two computers. :p

(Edited for relevance and to relate it to present realities. :p)

Have you ever heard of anyone manning two mice and two keyboards all at once? I think I vaguely recall a friend of mine who related he.. Or was it she? Who did exactly that. But I’m not talking about anyone else actually. I was talking about the recent inconvenience that I have had to “suffer” because I’m on a Mac.

Yes, I have had to use two computers at once.

Because I didn’t have DSL/broadband installed at that time, I have had to use my cousins’ computer, because that was where dial-up connection was.

So I would chat with my other clients and bosses on the desktop, with the keyboard behind Sayuri. I was a totally funny sight and I hated the inconvenience. I eventually realized that there must be some other way to get around my problem of having to work two keyboards in a space barely wider than a MacBook Pro (I’m using a Macbook). It was then that in my griping, my cousin showed me Windows XP’s On-Screen Keyboard. That was the one thing that wasn’t on a Mac that I totally loved.

So there I was, typing away with the mouse on Yahoo Messenger. At first, it was fun fumbling through the Yahoo Messenger conversations. But when the novelty wore off, I finally got annoyed and dragged the keyboard nearer to me.

Even when I got my Cable Broadband (it’s not as impressive as it seems to sound) installed at my Uncle’s home, I still needed to use their PC sometimes because some of my work entailed using Windows programs.

Then I remembered that back in my hometown, I did get to use two computers at once, the PC being my ancient desktop that now lacks a CD drive, two hard drives, and RAM. Because I had them all sent to me here. Heheh.

So how was the experience? I am addicted to working on two computers. Because of this, I still want another laptop, even if my last purchase was harrowing. I’m debating whether to still get a used laptop or a new one, then I’ll put Windows XP on it, for my other job.

In fact, I was dreaming of dual-booting Windows and Ubuntu Linux on it, but I don’t think that will work, on the 20-30 GB of hard drive space that’s the standard for used/surplus laptops, IF I get a used one. Though some people would think that using three OS’s is mighty superfluous, here’s what I have in mind: my main workhorse will be Sayuri. Then when I need to try/test and review Windows applications, or Windows-based .exe ebooks, I will have to use Windows XP. Then when I do not have the desire to work on Sayuri, and I just need a change of environment, I will work on Ubuntu.

*Rubbing my hands in glee*

I am just praying for the best deal possible. Because my last purchase was so, so, traumatizing, I do not want to make the same mistake of having to deal with a psycho. 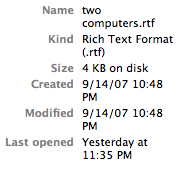