Are you the kind of person who thinks that you have to always show your tough side no matter what? You know, those people seem to be insensitive and uncaring, but in reality, are actually human beings who also need some tender care. Some of these are lucky enough to have other people to come home to – people who love them and meet their emotional needs. At the other end of the spectrum, there really are people who might not have anyone to turn to when they need a sympathetic ear – or a warm hug.

This is where Japanese inventors will not fail the whole world. One of the latest quirky gadgets to have come from the Land of the Rising Sun – the Sense-Roid.

It doesn’t take much imagination to figure out what the Sense-Roid does based on that image, does it? The Sense-Roids is a “hug yourself gadget”, and it does what it says on the tin. For people who need a hug (and we all need one every now and then!) and don’t have anyone to help out with it, the Sense-Roid will do the job.

This gadget was developed by a group from University of Electro-Communications and even won the top prize at IVRC 2010. The Sense-Roid system is composed of a mannequin (or something which looks like a mannequin) and a jacket. Both mannequin and jacket are hooked up with all sorts of tactile sensors, which tells the system if a user needs a hug. That is, when the owner of the Sense-Roid initiates a hug.

When this happens, the sensors activate muscle-like devices in the jacket, giving the user the sensation that he is being hugged back. More than hugging, Sense-Roid can also rub your back and even give a massage. The trick is to give the device input that you want to be done back to you.

Weird – there is no doubt about that, but I won’t be surprised if the Sense-Roid does not get its own circle of followers. Come to think of it, this is not as weird as that Kiss Transmission Device I wrote about.

Here’s a video of how the Sense-Roid works. 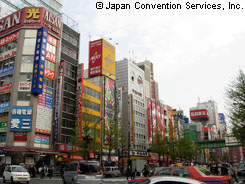 There is nothing like entering a shopping mall solely dedicated to electronics and electrical appliances. Even the smell of the air is different, and you can’t help but feel giddy with all the possibilities in front of you. If this is your idea of heaven, then the best place to go is Akihabara in Tokyo.

Also known as “Electric Town,” this area of Tokyo is crammed to the seams with hundreds of shops selling electronic gadgets and electrical appliances. Akihabara has made a reputation for itself, both locally and internationally. Indeed, it is one of the most frequented destinations in Tokyo.

More than gadgets, however, Akihabara is also known for being the center of manga as well as cosplay – two art forms that have taken the world by storm. Strolling around the area, you can spot lots of maid cafes, wherein the staff are dressed in maid costumes. They are there to serve the customers in a manner such as how servants would treat their masters. If it is anime and manga that you are impassioned about, then the Tokyo Anime Center is your destination of choice.

If you are worried about Japanese products not being compatible with international standards, you should know that there are also numerous duty free shops in the area. These duty free shops offer overseas specs gadgets and appliances. The staff in these stores is usually multilingual, and are more than ready to assist international customers.

To know more about Akihabara and get an almost real experience, I suggest the free virtual tour being offered online at New Discovery of Akihabara.

I’ve always been a fan of Sanyo’s “pistol grip” high definition Xacti camcorders, and there are now reports that those lucky Japanese will be the first to get hold of the new Xacti CG11 HD.

Looking at the basic specifications, it’s not a huge step up from the CG10. It still shoots in 720p HD using the H.264 format — you’ll need to pay more if you want full 1080p recording — and can take SDHC cards up to 32GB.