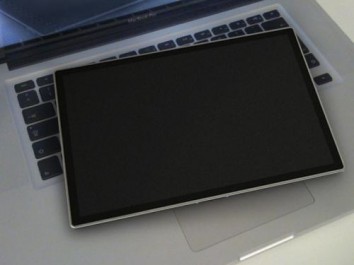 Don’t worry, it had me fooled for a moment too.

Now these purported pictures of the mythical Apple Tablet or iSlate or iPad or whatever name it is the Apple rumor mill cranked out this time surfaced just a few hours ago. Posted by designer and user interface guy Dustin Curtis (the same guy involved in the American Airlines website design dust-up) on his Posterous account, the images are of the alleged tablet sitting on top of a MacBook pro.

While some blogs, like Mashable, are on the verge of being convinced on the basis of these pictures, I’m rather skeptical.

At first glance I bolted up in my chair, stared at it for what felt like an eternity, and I went “Oh my goodness it’s real and it’s beautiful!” After a choir of Apple fanboys showed up beside me and sang praises at the picture, I took another glance and I saw it. Those are pretty convincing pictures on first glance alright, but they must be fake. Seriously.

Look at the shadow on the picture on top (go to the original site for a higher-res image), and you’d notice right away that it looks a bit flaky. It looks like drop shadow done in Photoshop, if you ask me. You can also check out this other picture:

Now Mister Curtis, nobody here on Gadzooki is going to come to your house with pitchforks and torches a-blazing for doing that. Well played.

What do you guys think? Is this the real deal or a clever photomanip? You should tell me about it in the comments!