Japanese telecom giant NTT DoCoMo has developed a pair of headphones that gives us the ability to control our mp3 players and phones by mere eye movements. 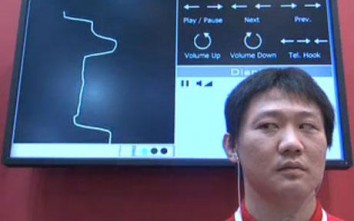 Designed to look like a set of regular earbuds, the NTT DoCoMo customized headset is able to read electrical changes on the surface of the human eye. A user who looks from right to left can pause music, right and then left glances skip to the next track, and rolling the eyes clockwise helps raise the volume. The company hasn’t announced plans to release the eye-based headset to the consumer market any time in the near future.This type of eye tracking technology is mainly used in the medical field, and hasn’t been widely explored by consumer tech companies. NTT DoCoMo modified the method used to track tiny electric charges, as the sensors on the Japanese company’s headset are located near the earbuds themselves.

I don’t think we can see this in everyday devices, mainly because it’ll be a real pain to actually switch tracks using our eyes, especially if we’re commuting and all. Imagine having to browse through an album using your eyes. I can actually see a use for this for disabled people, especially paraplegics who don’t have use of their hands. Something like this could be used to drive a wheelchair or type for someone who may only have physical control over their eye muscles.

Well then, I’m pretty much applauding this technology, unless they’re made available to the general non-disabled public. I mean, really, are we going to be that lazy that we can’t even be bothered to reach for a button?