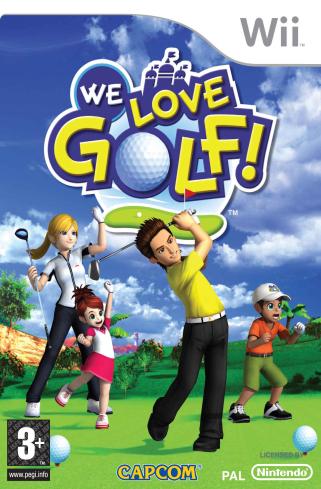 If you’ve played Wii Sports, you might have found (as I did) that Wii Golf is one of the best little minigames to play. It’s fun, relaxing and best of all the action does really well to mimic the actual sport. However, you may have been disappointed with the fact that Wii Sports golf is very short. This is where We Love Golf! can fit in.

We Love Golf! transforms the Wiimote into a virtual set of golf clubs, creating the most immersive golfing experience available off the greens. This new title is being developed in partnership with Camelot Software Planning, best known for developing successful sports games for home systems, including Hot Shots Golf and the Mario Golf series.

We Love Golf! presents a realistic golfing experience with a fresh new spin incorporating the Wii Remote’s unique motion-sensing functionality. Players will use the controller to choose clubs, line up shots, swing and even add a touch of fade or draw with a flick of the wrist. Just as on a real course, gauging wind conditions, correct club selection and careful reading of the greens are all essential for victory. A variety of game modes, multiple characters, unlockable content and online gameplay will provide endless hours of putting heaven.

Why will you like it? Well the stylised Japanese characters are very cute, and give an instant cue that the game is a Capcom creation – which should mean high quality. It also means you’ll get some arcade fun in an anime style package – which frankly sounds really great and is a new approach instead of the usual Miis that you have in many Wii games.

For those of you who are a fan of the golf game genre, you may see some similarities with Everybody’s Golf – a great game in on the PSP. The similarities aren’t only visual however. Once again, this is a game that won’t confuse you with a huge array of complexity, in fact one of the real pleasures is how straightforward it actually is to simply pick up and play.

There are a variety of courses to master without the awkwardness or unnecessary setup that a lot of other golf games have. Granted, it’s not going to be as deep as Tiger Woods (the games not the man!) but as mentioned earlier, it has far more to offer than Wii Sports golf – so in that way it’s a very happy medium between fun arcade styling and realism.

One of the best things about the game is the actual control mechanism – the Wiimote works perfectly here and many games developers could take a leaf out of how well the system has been implemented. The swing action is simply superb. The graphics however give you an indication of the level of difficulty here – it’s rather easy to get exactly the shot that you want. On top of this, I found an issue with the opponents being just too easy in single player mode – though hopefully they get harder the further you get in to the game.

Online gameplay has been implemented in We Love Golf! – to a rather impressive degree. There is the opportunity to play online with up to 16 players, whilst you can also go 1v1 on the links in either Friend Play or World Play. This should give you plenty of opportunity to swing your club in anger or rejoice in victory and have a lot to brag about.

There are a variety of game modes on offer including tournament, character matches, stroke play, special minigames and more. Telecast style presentation also puts you firmly in the game, giving you a chance to see just how you did with replays and commentary. On course, there are a range of obstacles and you shouldn’t get too bored as each one is unique.

In terms of the unlockables above as this is a Capcom game there are some real gems here. First of all there’s the standard costumes, characters and courses that give you extra content on to play with. On top of that though, there’s the added bonus of Apollo Justice, Arthur, Chun-Li and Jill Valentine to find in the game. What could be better? There are even two extra characters specially implemented for western gamers.

So, is We Love Golf! worth buying if you have a Wii? I certainly think so, especially as it is suitable for all ages and is genuinely fun to play.