Ask me what my favorite laptop brands are and I’ll tell you hands-down that it’s either Apple or Thinkpad. I absolutely love the way they design their notebook computers to be simple, functional and usable. Oh, and they look cool, too. And what’s even more important, they come in the two colors (and gradients in-between) I consider to be best for laptop computers: black, white, and matte metallic grey!

Okay, forget the candy-colored iBook G3’s of the late 1990’s. The more modern G3 and the G4 iBooks came in shiny white. PowerBooks came in black (from the Wallstreet to the Pismo), white (the Titanium editions), and then metallic grey (the newer Aluminum editions). The same goes with the MacBook (black and white) and the MacBook Pro (metallic grey).

And let’s not get started with the Thinkpad. IBM’s flagship brand (since sold off to Chinese computer maker Lenovo) comes in any color as long as it’s black. Sure, it’s not cutesy candy-colored but it’s business sexy.

Black comes off as serious, while white looks clean. Grey is a good in-between. Just don’t make it too glossy or it would look like cheaply painted plastic.

Next to the ThinkPad and Apple, most would probably agree with me when I say Sony is next in line for good laptop designs. Their Vaio series are well thought-of and come in fashionably stylish designs. While I’m not raving about the curves and colors of the Vaio, I’d say Sony tries to target the stylish crowd. And how else to target the stylish but with bright, attractive colors?

Sony has just announced its new 13.3-inch Vaio C series. Aside from the usual amenities like Core 2 Duo and impressive graphics capabilities, the new C series also comes in different colors. You have a choice of seashell white, blush pink, spring green, espresso black and urban gray. Not bad for laptop colors. It’s not too much of the candy-colored iBook G3 fare that came to me as too child-like. The Sony Vaio C is trendy and chic. 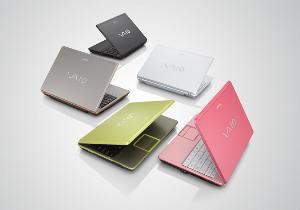 DailyTech gives a short preview, focusing more on the system specs rather than the fashion statement. What’s notable is Sony’s choice of the black-colored model for its higher-specced machine, probably taking a cue from the Apple MacBook. You do pay a premium for black. See? Black is cool.

… it’s the hardware that matters and the 5-pound VAIO C Series delivers. In addition to the aforementioned Core 2 Duo processors, they also include a 13.3″ widescreen display with XBRITE-ECO screen technology, 100GB 5400RPM SATA hard drive, DVD±R Double Layer/DVD±RW/-RAM drive, 802.11a/b/g wireless and Bluetooth 2.0+EDR. Surprisingly, Sony is taking a page from Apple’s book by giving its black C Series notebook the best specs (at least for the European market). In this case, the black model features a 256MB GeForce Go 7400 mobile GPU while the other models make do with integrated GMA950 graphics.

In terms of looks I have to say that these laptops stand somewhere between an Apple Macbook and the new iPod Minis (oops, I meant to say iPod Nanos) in terms of design and colors.

Even though the lack of a decent graphics card in the low-end models might disappoint some people, the rest of the specifications aren’t too shabby if I do say so myself.

For me the only downfalls of this product is the relatively low duration of the battery (from 3 to 4.5 hours), and having a Windows XP Media Center edition instead of a normal XP distro.

I wouldn’t expect to do any serious gaming on the Vaio C except probably for the black high-end model. Still, laptops below 14-inch sizes are meant more for portability rather than performance. So in this case, the Vaio C would still fit the bill for mobile professionals who prefer to go both mobile and trendy. Here’s a good one for showing off at the Café.

The Vaio C series is expected to hit the market this October, with a base price of $1,350. I’ll probably get the white, grey or black one. Whatever color it comes in, I want one!