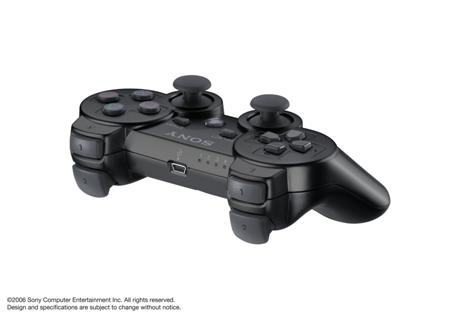 First, there’s the controller. While news was “leaked” about a boomerang-shaped controller, Sony finally decided to go for a form factor similar to the Dual-Shock controller of PlayStation 1 vintage, but of course, updated with bells and whistles, as ForeverGeek reports.

The controller is now lighter and wireless and uses Bluetooth to communicate with the console, but, it has the option of connecting to the PS3 via USB (thank God they didn’t make another proprietary port) and also recharges with it. After the positive feedback that Nintendo got after they unveiled their controller Sony decided to do something similar for their Dualshock and added a similar function to their controller. Though it isn’t a full 3D sensor, it can sense tilting and is adequate for games in which you drive or pilot a flying ship (as demonstrated in the Warhawk playable demo).

Battery life is limited to 24 hours, though, unlike the Xbox 360 controller, which lasts upwards of 300 hours. The PS3 will use Bluetooth 2.0, and not a 2.4GHz-type technology, similar to what’s used by the Xbox. GameSpot comments on this limitation, as well as on other observations.

The new controller has two analog sticks, the usual four-button complement on the right side, as well as four top-side trigger buttons. However, in Nintendo Wii fashion, the new PlayStation 3 controller also has motion-sensing capabilities. Sony’s Phil Harrison stated that the controller is capable of sensing motion in six degrees: up, down, left, right, forward, and back. Even with the added functionality, the controller will weigh no more than the wired DualShock controller, according to Harrison. Dylan Jobe of Incognito Studios proceeded to demonstrate the controller’s motion-sensitivity in Warhawk, a jet based fighter game. He tilted the controller to control the orientation of his aircraft. Turning the controller upwards caused the aircraft to point its nose in the air, and shifting the sides of the controller up and down caused the aircraft to tilt in a similar manner. Additionally, the controller will no longer feature force feedback vibration. Sony claims that the feedback vibration would interfere with games that use the motion sensor.

Like the Xbox 360 controller, the new PlayStation 3 controller will be wireless, but it will function via Bluetooth 2.0 EDR instead of 2.4GHz RF. Devices operating with Bluetooth generally have a range of 30 feet. Sony reports that the controller will have a 24-hour battery life, a figure that seems to be in line with other Bluetooth devices but far short of the 300-hour 2.4GHz models available for current consoles. Despite the decreased battery life, Bluetooth 2.0 EDR offers numerous features. Bluetooth 2.0 EDR can transmit data at rates of up to 3.0Mbps. Furthermore, by using Bluetooth, the PlayStation 3 may be capable of supporting other Bluetooth devices on the market, such as headsets, mice, and keyboards.

Battery issues notwithstanding, I think it’s good that one can actually use the controller while plugged in via USB (and charging!)–and this will be hot-pluggable, meaning you can switch across wired and wireless mode on the fly. What’s better is that you can also use your PSP as an auxilliary controller, or as an extra screen, as ForeverGeek further comments.

You will also be able to use your PSP as a game controller for the PS3. By hooking them up you can use the PSP and it’s screen to provide access to more options (A-la Nintendo DS). In E3 they showed the PSP being used as a rear-view mirror in a Formula 1 game.

Great choice for controller features, Sony! Many quite disliked the “boomerang”-type controller. What’s great with the confirmed design–it brings back fond memories of the PS One (at least in my case)!