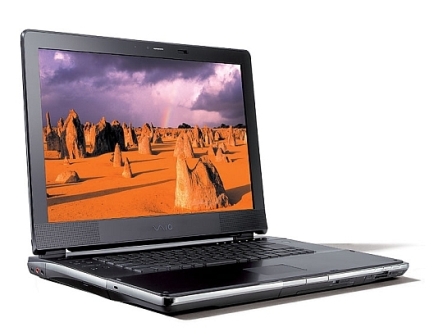 Forget the MacBook. Sony has just released the Vaio Type A with HDMI and a cool Blu-Ray-capable drive (read and burn, baby!). ForeverGeek mentions that Sony has a habit of announcing new products just a few days after Apple launches its own hardware. So in the wake of Apple’s coming out with the MacBook (in cool, shiny black!), Sony, in turn, announces its own black beauty.

Sony has made it tradition to announce similar gadgets to Apple’s on the same day, or a few days after. And with the Macbook being released today, Sony stayed faithful to it’s tradition and introduced today their new flagship model with a Blu-Ray Burner, which I think will be the first ever seen (on a laptop).

I wish Sony would decide to put a slot-in drive for disks instead of the normal ones, but still, I must admit this model is a definite improvement over their current A series laptop.

Now for the specs. Well, what can we say? Top of the line, as usual, in terms of multimedia capabilities for a notebook in this class. From Akihabara News:

This laptop would probably be great for watching those high-def Blu-Ray format movies. But then again, at this point it’s still a question of which standard (Blu-Ray vs. HD-DVD) will dominate.

Still, this looks like a great, stylish laptop–good enough to match the looks of the MacBook. I want one!