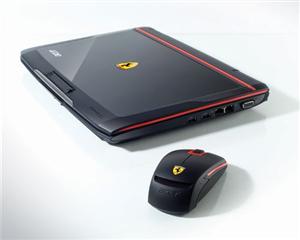 Don’t you just love that Acer Ferrari laptop? While I personally prefer a smaller-sized laptop (14-inches or less), I think these larger, fancier ones (among the likes of the MacBook Pro) are the weapon of choice for users who are into high-end processing and gaming. The Acer Ferrari fits into this category. And you know what, I would say it’s one of the Acer devices that started to target the high-end market; most other offerings in the past had been for the budget-conscious.

I personally have steered clear of the Acer brand before because of this image. The first laptop I owned (back in the 1990’s) was actually an Acer and after just a few years of service the hinges got so brittle that the lid broke off. Acer has had this image in my mind for the longest time, and I can probably speak for other consumers. But now the company is moving away from being the “budget” choice towards being the “cool” choice.

Business Week has a handful of photos of new Acer hardware designed in conjunction with Ferrari.

Acer is pushing hard to shed its image as a second-tier player in the global personal computer industry. The Taiwanese company ranks No. 4 worldwide and predicts it will soon pass Lenovo, its rival from mainland China. While Acer relies largely on low prices and close relations with distributors to rack up market-share gains, the company also is emphasizing its design skills by collaborating with Ferrari. [A] partnership between Acer and the Italian automaker … has led to a series of laptops and monitors that combine innovative new materials with the Ferrari logo and racing colors.

And it seems the Acer Ferrari has gained acclaim in the industry as it was reportedly the laptop that Microsoft sent out to bloggers as sort of a “bribe” for writing about Vista! And apparently, Acer is also stepping up with enhancing its image not only in the laptops market, but also in LCD monitors, smartphones and even flat-screen TVs!

By the way, I’m glad to be back writing for Gadzooki! I remember this was among the first blogs I managed back in early 2006 when it was still tech.erati and back when I was pro-blogging for BlogMedia.