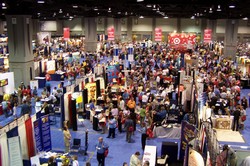 Conventions and conferences, that is. (If you thought of the seedier “con”, that’s not wrong, too.) For simplicity’s sake, let’s lump in trade fairs, exhibits, and symposia to our little word for the day.

Browsing through today’s dailies reveals a lot of cons being held all over the sprawling conurbation I call home, Metro Manila. For sure, there are many more being planned and held in wealthier cities in wealthier countries, as I write these words.

These cons run the gamut of conceivable interests, hobbies, and disciplines. In one international computer science magazine alone, I found around 40 computing-related events to be held around the world in the next three months. Just last month, the FCRC 2007 in , served as the mother lode for almost 20 separate conferences – cons within a con.

And that is just for one field. Year after year, in this little, Third World corner of the world where I live in, cavernous malls (the Philippines has 3 of the world’s largest 10), five-star hotels, and expo grounds are flocked by millions of not-so-rich yet not-so-poor people attending book cons, toy cons, gardening cons, computer cons, food cons, comic cons, sporting arms cons, SME cons, gaming cons, name-it cons.

It is such a vibrant scene where millions upon millions of pesos change hands, leading me to conjecture that if it weren’t for a glaring and yawning gap between those above and below the poverty line, the would be a nation. 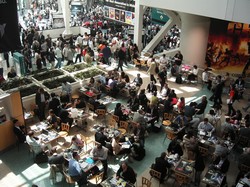 For me, today’s breadth and depth of cons in any country demonstrate:

1) A decent, if not great, spending power on the part of the consumers (better if there are lots of them, e.g. 11-million strong Metro Manila);

2) A decent, if not great, confidence on the part of companies, businessmen, and the cons’ sponsors;

3) An effective communications infrastructure – newspapers, magazines, TV, radio country-centric websites/forums/e-groups – with a good subscriber base. This spurs consumer participation and, consequently, helps sustain the success and commercial viability of the cons.

4) The advancement of a society as it moves from general interests to more focused ones – a computer scientist now has the luxury and resources to specialize in multi-agent systems, a green thumb specializes in cacti and succulents, a video gamer specializes in MMORPGs. Best of all, the market is wide enough accommodate both the general cons and the specialized cons.

I haven’t attended a wide variety of cons (I’ve gone to mostly tech and arts events), but I do feel blessed that I live in this “con world”. I know that if and when I delve into a new hobby or interest, chances are there’s a con already waiting for me…as long as the hobby’s not too obscure, of course. (But even then, there are esoteric cons!)

What does this “world of cons” offer me?

I view cons as a venue for education. It’s a good place to pick up both the basic and advanced facets of a field; to learn the types of people, organizations, and products tied to it; to familiarize one’s self with the unique terminologies and idiosyncrasies of the hobby; to broaden one’s view of – this will sound cliché – the world.

I view cons as a venue for human networking. Which is quite a daft conclusion, as cons are meant to make one person interact with another person. (Or at least, make one company/product/institution represented by a person interact with another person.) It’s one of the best places to build your list of contacts, clients, employers, partners, and even rivals.

Last but not the list, I view cons as a venue for shopping therapy. Cons often boast of discounted or hard-to-find products. These events present a great (if not the best) array of related products, from the mainstream to the arcane, all in one roof. Cons also present the best way to empty your wallet (and assure yourself of an empty stomach), just to get that wondrous feeling of, “W00t! I bought something cool for myself!”

Speaking of shopping therapy, I’ve got to save some cash, and save it soon – the 28th Manila International Book Fair is just a month away!