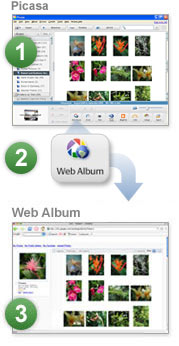 Flickr is one of the poster-boys (or girls) of Web 2.0. There’s the community-driven content, the tagging, and yes, the weird-sounding name (flicker without the “e”). And of course, it helps that Flickr used to be this small startup that was acquired by one of the Internet’s giants, Yahoo!.

What differentiates Flickr from the multitude of the Web’s other photo-sharing and storing services is the community nature. Flickr users are generally connected individuals, who can link to contacts, form groups, and create meaningful discussions. This is probably why it’s the most popular photo-sharing outfit out there.

But of course, there’s Google. And we know that whatever service is already available online, Google will have something to challenge that, and usually succeed at it. Take Gmail, for example. It came late in the webmail game, but it’s hot, and it gave features and functionalities that other webmail service providers could only dream of (2.5 Gigs of space? Wow!).

So talking about Flickr, Google has recently launched its web application for its not-as-popular-as-Flickr Picasa photo album software, dubbed Picasa Web Albums. As usual, it’s in “beta” and for now only by-invitation.

A few things I have seen that I am not fond of. First of all, it appears that it will only support JPEG formatted images. I tried uploading GIF and PNG images, and was given a warning that the image was not a valid JPEG. With Flickr, I can upload PNG, GIF and JPEG, which is nice since my screenshots are saved as PNG.
…
Aside from those minor issues, it was pretty easy to set up the album and upload the photos. It has a pretty good interface, showing your storage capacity used and available. It will let you rotate images to correctly display their orientation, resize the thumbnails and rearrange the order the photos appear in the album.

You can send invitations via e-mail to those you want to share your album with. For a visitor looking at the gallery, they can view the images in a full-browser slideshow, zoom in on them, and subscribe to an RSS feed for the entire gallery or for specific albums.

CNet reviewed the service, too, and was quite disappointed of the loose integration between Picasa and Piasa Web.

There’s a bigger issue I have with this service: It’s one-way. Once you upload photos from Picasa to Picasa Web Albums, there’s no link between them. If you write a caption or delete a photo on your PC, nothing changes on your online album (or vice versa). I’m spoiled by the technology of Sharpcast and Phanfare, both of which feature live synchronization between media files on your PCs and your online albums. I think synchronization is the only way to go if you’re going to have the same images online and on your PC. I’m disappointed that Google did not more tightly integrate their Picasa software and Web service.

Here are several big gripes, as echoed by this short review at Pinoytechblog:

Google’s Picasa Web does not bring anything new to the table. And 250MB of space? Flickr provides unlimited space and Photobucket provides 1GB of space. Plus no tagging.

We’re quite disappointed with Google. 250MB of space? No tags? This will not even be enough for the casual album users, especially at today’s camera resolutions. Flickr’s free accounts may have limited uploads per month, but the storage space is unlimited (it’s storage versus bandwidth, and I’d go for storage in this case!). And tagging is great for those searches and for connecting with people with the same interests in terms of subject and photos.

It’s a thumbs down for Google on this one. They could’ve made Picasa Web Albums a good contender against Flickr. It’s like a 900-pound gorilla against another 900-pound gorilla–but in this case, one has got more bananas in its arsenal!