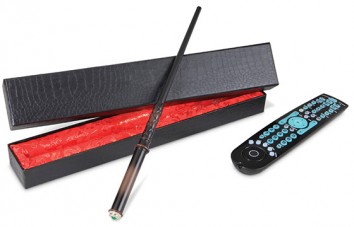 Harry Potter changed young adult fiction when it came out. Let’s face it, JK Rowling may not be the most erudite writer on the planet, but she certainly has a great imagination – one that she successfully put on paper and has captured the imagination of both young and old alike. That’s quite an accomplishment, if you ask me.

Of course, one of the most recognizably Potter-ian of all of Rowling’s imaginings is the use of magic wands. It’s one of those trademark images that make Harry Potter such an endearing mythology. The choosing of the wand, learning how to use it, and the flourishes you have to make are some of the things that has made kids and adults alike long for a wand of their own so that they can do magic much like the kids at Hogwarts.

If you’re still looking for a magic wand that actually works — in a manner of speaking then you should get the Magic Wand Remote Control. This is a very cool gadget that serious Potter fans (or any fan of magic) should have in their living rooms. As the name suggests, this wand is actually a universal remote control. Okay, a universal remote control that fits all of its innards inside a slender stick is all good and dandy but this remote control is definitely more than that. Squeezed inside the wand is also a motion-sensing accelerometer. What makes this nifty is that instead of memorizing commands and storing them in buttons like conventional universal remotes, the wand will map the commands to one of 13 different gestures. So instead of say, pushing a + or – button to change channels, you can rotate the wand in a clockwise or counterclockwise direction or move the wand up or down to increase or lower the volume. Cool, huh?