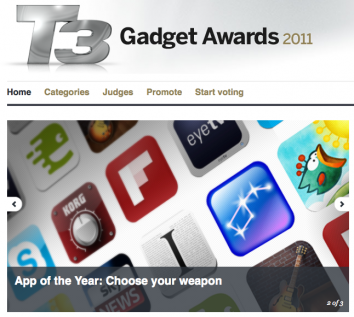 Crazy about gadgets? Love having your voice heard amongst the millions of other gadget-crazy people? Here’s news for you: the T3 Gadget Awards 2011 is now open for voting!

You can cast your votes at the awards home page, and you get the change to win a Smart TV from Samsung!  Voting is not all that hard as you will be given choices when you vote. More so, brief descriptions are included with the gadget image/name.  And if your preferred gadget is not in their list, you can always add it via the Wildcard section at the bottom of each page.  After all, just because T3 has not identified a certain product to be on their voting list, it does not mean that the gadget is not worthy of a vote!

With the voting open, experts are saying that at the end of the day, the main battle will be between Apple and Android devices.  Looking at the list of gadgets in the categories that T3 has made available, it is difficult to disagree.

What are you waiting for?  Go and participate in what might very well be the most important vote you will cast this year.  (Well, in terms of gadget goodness, that is.)