Breaking into the world of RC vehicles is as easy as purchasing the right equipment. You may not be much of a challenge for seasoned racers, but the whole point behind RC racing and performance is that it is enjoyable.

RC is a family-oriented hobby community filled with many different shapes, sizes, and types of radio controlled vehicles. There is an RC controller to fit any size hands. Here are a few helpful tips to help you and your family immerse themselves in this technology driven community. END_OF_DOCUMENT_TOKEN_TO_BE_REPLACED 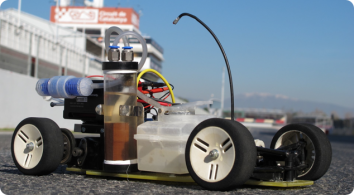 Here’s another “little” thing that can help you contribute to the fight against global warming – and in a fun way, too! I am talking about a Hydrogen-powered remote controlled car that runs on soda can rings. Ridiculous as it may sound, I am not pulling your leg.

Without further ado, here is the Earth-friendly RC car named the dAlH2Orean. (Cool play on words/characters, if I may say so myself.)

So how does this work? Go back to the times you spent in Chemistry class. Okay, maybe you were absent when this was taught, or maybe you simply weren’t paying any attention. Get some aluminum. Then get some sodium hydroxide – otherwise known as lye. If you combines these two, what you’ll get is – you guessed it – hydrogen. That is what powers this RC car. Even cooler is that they use soda can rings – which is made of aluminum; recycled soda cans! That is rather simple, isn’t it?

The main thing is how to get that hydrogen and use channel it to actually make the car run. Otherwise, you’ll just be releasing air for no reason. That’s where engineering know-how comes into the picture. The team of engineers from Spain put their heads together and got the car working! As you can see in the video, they did a pretty good job.

Now playing around with RC cars powered by a reaction between aluminum and lye is one thing. Using the same concept to power road-worthy cars is a totally different story! The engineers, however, are unfazed. They are actually aiming to extend the concept to power small vehicles. Road-worthy cars may be out of the question for now, but think about those tiny carts used in golf courses or big resorts. Think about trolleys that take you around large complexes. It is not unthinkable that in the future, these can be run using recycled aluminum and lye. Awesome or what?

For now, I’d settle on having my own dAlH2Orean or two. Who wouldn’t?