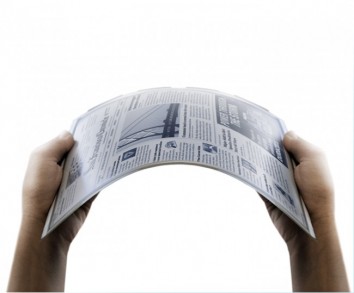 Yes, you read the title right: flexible. It’s because when I want to read the online copy of let’s say Neil Gaiman’s Good Omens, I want to bend my reader like I do a real-life newspaper. Let’s see the Kindle 2 do that. But kidding aside, the Skiff Reader looks like a great e-reader. Just a quick look at its specs would reveal an amazing 11.5″ screen with a resolution of 1200×1600 pixels! That resolution is big enough to display a full page of The New York Times on the screen. Also, that NYT page? It contains Skiff-only ads to keep them running. I hate seeing ads, actually, but whatever keeps them afloat I guess.

Yeah, the Kindle may be the best e-reader nowadays, but the Skiff is poised to become a big threat if it has its own way: they’re not only going to be selling an e-book reader, but they are aiming to be a publishing platform.

Skiff showed us a total of four different devices accessing its content: a color e-reader prototype as well as Skiff apps running on a Palm Pre, Viliv MID, and of course the Linux-based black and white e-reader launching sometime this year. They even promised an iPhone app as you’d expect with synchronization across all your devices (at least as many as the DRM will allow). Skiff tells us that an Android device is also in the works.

Unfortunately, as a Kindle competitor, Skiff was not willing to discuss the extent of their content partners nor the number of publications (blogs, magazines, newspapers, and book categories are listed on the store) that will be available at launch.

Okay, now I’m listening. Will Skiff be able to live up to its promise? With Kindle being equated for e-readers already, toppling it is going to prove to be quite a challenge. Let’s see what happens.