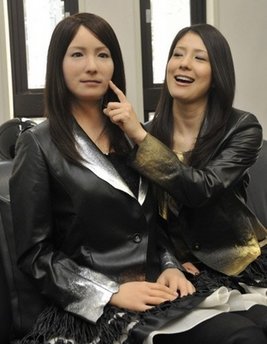 You know humanity’s doomed if we get robots that are constantly pushing on the boundaries of the uncanny valley.

Okay, maybe I was just exaggerating a bit, but as you can see, Geminoid F, a copy of a woman in her 20s with long dark hair, exhibits facial expressions more naturally than previous androids. However, even though she’s more realistic than other robots, we all could see that she still hasn’t quite overcome the uncanny valley yet and that she’s still – for the lack of a better term – creepy.

Ishiguro, a professor at Osaka University, is famous for creating a robot replica of himself, the Geminoid HI-1, a teleoperated android that he controls remotely. The new Geminoid F (“F” stands for female) is also designed to be remote controlled by an operator.

In a press conference in Osaka, Ishiguro demonstrated how the android could mimic the facial expressions of the woman as she sat in front of a computer with cameras and face-tracking software.

Ishiguro’s previous androids, in addition to his own copy, include replicas of his then four-year-old daughter and of a Japanese TV newscaster. I couldn’t find more details about the identity of the Geminoid F’s master template, only that she is “one-quarter non-Japanese.”

What do you guys think? Also a video of the robot below: