I don’t know about you, but I am not a morning person. Ever since I was a child, waking up – and actually getting out of bed – has been the hardest thing for me. I’m pretty lucky that my job does not require me to get up before 8 am every day, but even getting up before 10 is such a task. Well, I can wake up but is no assurance that I will not go back to sleep after hitting the snooze button.

If you are anything like me and you really need something to wake you up effectively in the morning, then here’s a gadget that might just do the trick: the Target Alarm Clock. 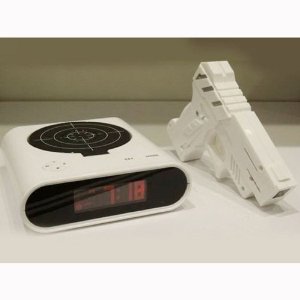 As you can see, it looks just like any ordinary alarm clock, but it does have something that other alarm clocks don’t come with – a gun. Well, the gun is not included for you to shoot yourself, the clock, or whatever it is that is trying to get you out of bed when all you want it 5 more minutes. The gun is actually functional and safe.

When the alarm sounds – and boy, the noise is supposedly loud enough to wake up your neighborhood – you can’t reach out and press the snooze button for your extra 5 minutes. In fact, there is no such thing as a snooze button in this clock. Instead, you will have to grab the gun and shoot the target, which pops up as shown below. 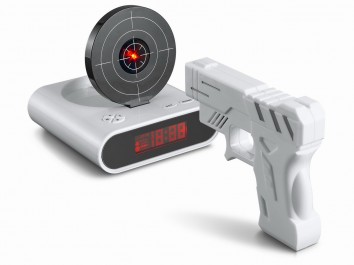 The only issue here is if you wear contact lenses, and you take them out at night. You have to hit bullseye to shut the alarm clock up, and being practically blind, you probably will not make it. Then again, that mere fact will force you to go to the bathroom to put your lenses on, waking you up for good. Either that or you grab the clock and smash it against your bedroom door.

Oh, this gadget also includes some games which you can play when you have nothing else to do.

Get the Target Alarm Clock from Amazon for $22.96.