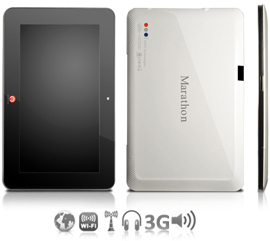 Steve Jobs said a very scathing remark during the presentation he made introducing the iPad 2. He said that 2011 could probably be the year of the copycats as many companies are attempting to ride on the amazing market niche the iPad practically made on its own – the tablet market. It may sound arrogant of Jobs but he does have a point – every single electronics company out there is making their own tablets and enter an increasingly crowded market that is still being dominated by Apple despite strong opposition from Samsung, HP and the Android operating system.

One new company that is attempting to make a mark on the tablet market is the little known EAFT Technologies PVT.  Limited. The Bangalore, India based company manufactures “world class products in the area of Education and Entertainment.” It also offers software solutions for digital entertainment. The company is releasing the MagicTile Marathon Tablet to the market. EAFT is a thin and allegedly fast multimedia tablet that offers features you’ve come to expect from a latest gen tablet – 3G, WiFi, USB connectivity, Bluetooth and a full support for 1080P video and Flash. But the Marathon stumbles in a feature that should be seen as a no-brainer for tablets like this, especially one that touts to using a Tegra 2 processor – the operating system.

The Marathon will be shipping with Android 2.2 Froyo, which is already considered an “old” version of Android OS. Newer tablets are already being shipped with Gingerbread inside while the newer ones are already equipped with Honeycomb, the Android 3.0 OS version that has been optimized specifically for tablet devices.

The EAFT guys should rethink about this decision to ship with Froyo. With hardware that is more than halfway decent, the company should look to improving the OS as well – maybe with an online update?