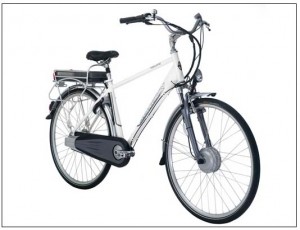 When I first saw the unveiling courtesy of CNet’s Loaded podcast (with Natalie del Conti) I must admit I raised an eyebrow.  Wouldn’t a battery in a bicycle defeat the purpose of an exercise? 🙂  Ah, but later I found out that in some countries, people commute to work, the market and anywhere else in bikes.  China, Amsterdam, Japan… as examples.  So in lieu of an exercise, pedal energy conservation was the prime motivation.  To bring people from point A to B with as less sweat work as possible.  It has an 8-speed gear control mechanism, and the battery itself is set to last for a full 30 miles max.

The battery was developed in partnership with Toshiba.  It promises to fully charge a pack in 30 minutes!

Dubbed as an EBike it will start selling in retail stores by the Q1 of 2009.  So, eh, it won’t make it to the holiday lists I guess.