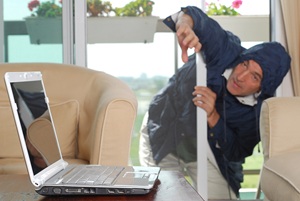 Criminals are a cowardly and superstitious lot. Oh wait – that’s Batman’s bit. What I meant to say was that criminals, as much as they might think themselves clever, are a rather simple bunch. Oftentimes they merely want to be able to steal something – anything – and get away quick.

Speed is often the name of the game when it comes to burglars. Get in, get out with the booty – hopefully without being caught. But there are simple ways to defend against burglars. You can actually use bits of stuff you may have lying around the house to improve your home security.

Leave a broken laptop lying around somewhere it may be the first thing a burglar notices upon breaking in, possibly on a coffee table in your living room. The reasoning behind this is that as a burglar, one would look around upon breaking in, and once they spot something that they may deem valuable – such as a seemingly working laptop – they would instinctively grab it and go.

A TV set you can program to turn on and off can work wonders in boosting your home security – especially at night or when you are away. Any burglar casing a home will be wary of a home with a TV that is on – but isn’t turned on all of the time.

This is pretty simple – keep your home’s entry point well-lit. A well-lit entry point will discourage forced entries as criminals would not wish to risk being seen prying open your doors or windows.

About the guest author:

Mickey is freelance blogger who specializes in technical writing and as such often receives “technical support” questions from his parents. He gets all his security system needs from http://www.selecthomesecurity.com/