Much smaller than the Motorola RAZR, the new MP-500 by Jens of Sweden is a very attractive alternative to the Ipod Nano. 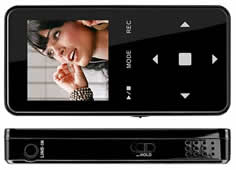 Additional features include stereo speakers, with SRS, TRUBASS, WOW, equalizer, radio, scratchproof black or gold casing, and built in USB2.0. The battery has 15 hours of audio playtime, or 8 hours of video playback.

The JES MP-500 is available in both 1GB and 2GB flavours, costing 190USD and 240USD respectively.