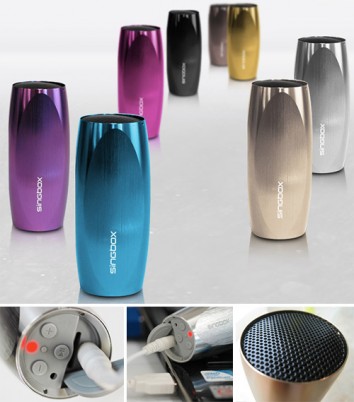 With the portable audio player market getting so crowded – what with the many products being released by various companies (and we’re not counting the gajillions of unbranded players originating from China) – it is getting harder and harder to stand out from the crowd. You need a unique come-on to get noticed.

The Singbox portable audio player is one audio player that seriously demands attention mainly because of its very unusual shape. The Singbox eschews the current trend of creating extremely diminutive products that’s almost the size of a matchbox but a lot thinner in favor of a relatively hulk-like figure in the form of a cylinder that tapers at both ends. The design itself is was not done on a mere whim. There is a really good reason for its shape – along with the player, the Slingbox also contains speakers, more specifically two 2 watt speakers located on each end of the cylinder. This makes the Singbox a really cool player and possibly one of the smallest boomboxes available right now – which brings us back to players being diminutive. Singbox still makes it into the smallest players category after all.

The Singbox can read MP3, WMA and APE files, which makes it fairly flexible in terms of file format recognition. It also has a built in FM tuner for those times when you wanna check out what’s playing on radio stations. The Slingbox has a microSD slot (its main storage option), which allows you to play up to 32GB of music. The battery can be charged through the USB port (which means it charges while you’re loading music on to it). The battery can provide up to 13 hours of uninterrupted playback, which is more than adequate especially since you’re basically playing an audio player with speakers on it. The Singbox comes in eight different colors so you’ll definitely find a color you’ll like.