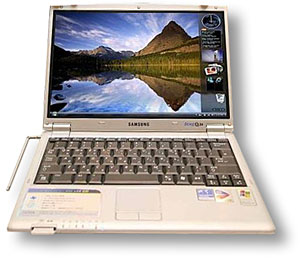 We earlier reported that Samsung will be launching its NAND-based laptops minus any traditional hard-drive. No hard-drive you say? Oh, but I love my hard drive! Not to fear, NAND is here.

We’ve gone out around the blogosphere to collect more reasons why you’d want one of these little things with Flash-based hard drives (via Hiptechblog):

I especially like the last part–running cooler–as I read somewhere running hot laptops on your lap can make guys impotent!

However, there are drawbacks. First, they’re expensive. Samsung’s Q30-SSD is expected to retail at about US$ 3,700, which is quite a high price point for a Celeron-based machine with only 32GB of storage. For that price, you could already get yourself a top-of-the line Core Duo-based ultraportable or probably a gaming notebook with an ultra-large widescreen (Alienware, anyone?).

The good folks over at Gizmodo seem to of the same opinion on the price issue.

Bring on the Core Duos, and lower that price! Come to think of it, it wasn’t too long ago when all laptops cost that much or more. Just think of this as a peek into the future.

Still, if you’re for portability (2 pounds), power efficiency, fast operation and a cooler notebook (we don’t want to ruin the chance of ending your bloodline, eh?), then a Flash-based notebook would be the ideal choice.

And if you have concerns about Flash drives’ having a limited number of writes before failing, fret not. It seems there are ways to circumvent this. Here’s a good explanation from a comment on the Gizmodo post.

Yep, SSD has a finite life. Each sector can only be rewritten a certain number of times before it won’t take new data. There are algorithms that spread the writes over the entire drive, so instead of 10,000-100,000 writes to one sector, you get a trillion writes for the entire drive. That’ll take quite some time – 650KB/sec *continuous* for 10-100 years. That kind of abuse will kill most hard drives, and your computer would be obsolete by then.

One cool thing is that flash doesn’t fail all at once like a hard drive — so you’ll know when its life is up. Also, as you add capacity, you get even more rewrites.

So it should last even longer than a regular hard drive. Great. If only we had such a technology on most of our flash-based USB sticks!