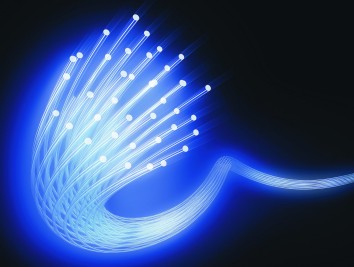 In our world of instant gratification and time-saving technological improvements, one would imagine American internet connection speeds would be among the fastest in the world. Unfortunately for digital-centric individuals, the majority of America is far behind in connection speeds. According to The Organization for Economic Co-Operation and Development, only 7.7 percent of the United States offers the highest-quality Internet speeds through fiber optic connectivity.

The Speed of Fiber Optics

The early years of public Internet access was numbingly slow. Although dial-up connections were an essential stepping stone to our current digital world, it wasn’t long before consumers and businesses required faster connection speeds. To satisfy this desire, DSL and cable networks began weaving their copper wires throughout the country. While much faster than dial-up, as technology advances so does the need for faster network connections.

What is Fiber Optic Connectivity?

The lifeline of fiber optics is how information is transferred from one source to the next. Unlike cable and other internet connections, which use copper wires to transfer information, fiber optic communication releases information through pulses of light. Essentially, data attaches itself to these light pulses, which are transferred via optical cables.

While this technology sounds like a new innovation, fiber optic communication was developed decades ago in the 1970s. The advantages when compared to electrical transmissions are extraordinary; however, the infrastructure to supply American homes and businesses with this technology is simply not there. This raises the question of why American communication companies don’t invest into optics when the benefits are so clear.

Along with laying the actual fibers, establishing optic connection webs is time-consuming and costly. The cost of installation is one thing, but also the cost of insulating fibers with weather-resistant tubing and sleeves is costly and requires an investment of time.

Unfortunately, access to fiber optic internet connections is severely limited. Unlike other countries such as Sweden, where the government has invested into fiber optic networks throughout its country, the United States government leaves the implementation of such networks to the private sector. Privately held communication companies continue to push their electrical transmitted connections to the majority of Americans instead of investing into the “greater good” of digital connectivity.

There is a light at the end of the tunnel, though. Corporations such as Verizon, CenturyLink and Google have begun small-scale fiber optic networks; however, these fiber webs aren’t where you’d imagine. Instead of integrating major metropolitan areas into the ultra-high speed age, small towns such as Chattanooga, Tenn., and Provo, Utah, are reaping the benefits of fiber networks. These “test markets” have shown an increase of tech-savvy businesses and residents as its data transfer speeds do not limit activity and developmental possibilities.

While disheartening to the tech-savvy around the country, it’s only a matter of time before the aforementioned corporations and start-up ventures begin laying the foundation for fiber optic connectivity. Until then, consumers must make do with their current connectivity options while simultaneously voicing their desire for fiber connection options with their service provider.