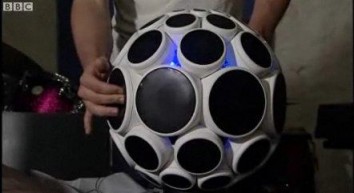 Has there been any kind of major developments or innovations in musical instruments. As far as I know innovations have been quite rare. There are new instruments that have been invented but it’s still more of a curiosity that only a limited number of musicians play mainly because so few are made, if at all. Most new instruments are sometimes made as on-offs.

One of the latest contributions to the world of instruments is one that was made by Adam Place. With the help of sound engineers from Bristol, he was able to come out with a new instrument called the AlphaSphere. The Alphaphere, as the name indicates, is a spherical instrument attached with many pads all along its surface, about 48 pads fill the whole sphere. Place said he imagined the AlphaSphere because he was getting bored playing with ordinary keyboards and wanted a new way to play synthesized music.

According to Place, the AlphaSphere reacts to pressure – as you press on the pads harder and harder, the notes will also change. This allows for a level of interaction with the instrument that is quite engaging. Also, since the AlphaSphere is portable and actually quite interesting looking, a musician who plays synthesized music is freed behind the conventional keyboard and able to really perform in front of his audience – a domain that was once only the exclusive domain of the guitarist and the singer.

The AlphaSphere can be preprogrammed with different sounds and from there the musician can create his music. One pad can be assigned to the drumbeat and as he presses harder, the beat goes faster. He can then press other pads that correspond to the rhythm tracks or the chords. The interesting thing is whether this new instrument will gain traction among electronic musicians.