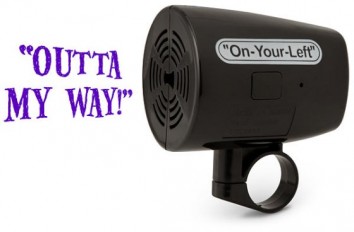 Bicycles nowadays are so high tech. You deal with different metal alloys for the frame, different technologies for the moving parts of the bicycle – even the seats and handlebars are all products of new technology. The only thing that seems to have been left behind has been the bicycle bell. That is until the Record Your Own Bicycle Bell.

The bicycle bells that we think of when we hear the words are those actual “bells” that are attached to children’s bikes and many adult bikes. You press a lever and you hear a soft, musical ding-ding-ding coming out of the bell. It’s all well and good for its purpose – you do get transported to a time that is more innocent whenever you hear that distinctive sound – but if you’re really serious about gadgets then you’ll really have to check out the Record Your Own Bicycle Bell.

This high-tech “bell” actually allows you to record up to 20 seconds of sound – whatever it may be. It’s really more of a recorder on steroids. The whole contraption can be mounted on your bicycle’s handlebars. It is equipped with two buttons, press one button and you’ll hear the sound or message that you’ve recorded. Depress the other button and you’ll hear the traditional bell sound. It’s a really novel gadget you can put on your bike. You can record a really loud siren sound if you like – one that will call attention to you and your approach. You can also make people laugh by recording messages like “Harley Davidson approaching!” It’s a cool addition to your bike that is not necessarily performance related.

IF you’re interested in getting the Record Your Own Bicycle Bell, it costs $19.99 at Thinkgeek.