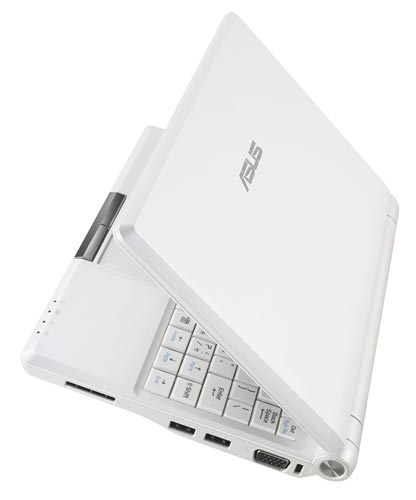 Taiwanese manufacturer Asus managed to create more than stir last year with the release of the EEE PC 701 – it was more of a revolution. These days, when anything that doesn’t come with an Apple picture tends to get readily forgotten, it managed to make a big hit. No surprise either mind, the little laptop is well put together and with a great number of features.

The release of the EEE PC 900 is designed to go some way to address the (albeit minor) criticisms of the original. Previously, the seven inch screen managed only 800×480 resolution, whilst the new model comes with a nine inch screen with a display of 1024×600 – once again lovely widescreen but with that bit more room to use.

Of course, another issue was storage space of the original. The 4 gig was fine for work, but anything more than that and you could have been struggling. This time round, you get 20GB of solid state hard drive to play with. That means just as before you’ll get a machine that boots incredibly quickly but this time you can stick on films etc and not worry about where that next essay will be saved.

Extras include a 1.1megapixel camera and Wi-fi built in. This is great for your home network and if you’ve got a small study then this would make an excellent addition. Just as previously you’ll get Linux on there for free – something I’d say is perfectly adequate for purpose. However for the die-hards who want Windows, it is possible and it works very well indeed.

Battery life remains about three hours – not too shabby at all for such a useful little machine. The only issue I found was that the keyboard remains relatively small – not too great for my speed typing to be honest! In terms of value for money, you won’t find many other workhorses out there that are so reasonably priced. In fact, I’m beginning to think that everyone should have one…