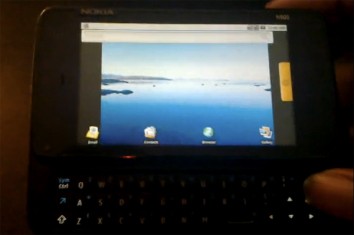 I’m sure most of you were waiting for this, right? Since Nokia’s previous Maemo Internet Tablet offerings were also capable of running Google Android, it was only a matter of time before somebody thought of installing Android on Nokia’s intrepid new smartphone. And imagine: installing two open platforms on one excellent phone? It’s a geek’s wet dream come true.

Brandon Roberts is the man responsible for the dual-booting marvel, and while he’s describing it more as a proof of concept right now than a workable solution, from what little is shown in the video he’s come a decent way. The keyboard seems to work, and the display is running at the N900’s WVGA resolution; a boot menu allows you to choose between Maemo and Android.

Right now there are no instructions as to how exactly he did it, but we’ve a feeling this could be a popular hack assuming all the N900’s core hardware could be encouraged to work with Android. The combination of Maemo for experimentation and Android for everyday use could potentially transform the N900.

Okay, it kind of sucks that there are no instructions on how to install Android on the Nokia N900, but I guess the hack’s not yet refined. I can’t wait to see this in the future though.