Nintendo’s strategy going forward has been clear: don’t compete with Microsoft and Sony at the level of graphics and processing power. Rather, focus on innovation in gaming and expand the market. Keep things intuitive and simple. Aim for the iTunes demographic. 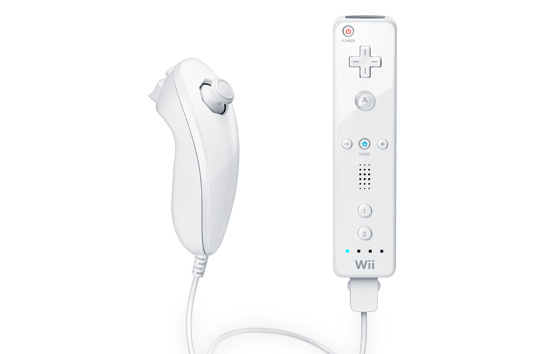 So they’ve certainly got one thing right: motion control is intuitive. Think about it. Remember the last time you were watching your friend play a racing game, looking ridiculous as he leaned to the right while making a sharp turn, despite the fact that his leaning didn’t help at all. Or how about all those head jerks that gamers make when they’re playing a space shooter like Star Fox and dodging objects that are flying straight at them.

So getting our bodies involved in actual game control is highly intuitive, and I’ve gotta give Nintendo props for that. But let’s move on to my main concern about the Wii controller(s) system. Start by looking at the picture above. Now imagine handing those things to your mom? Or your non-gaming wife? Or your dad whose never played a game in his life.

If history tells me anything, it is that non-gamers get overwhelmed very, very easily by the controller. So, now, instead of one controller for both hands, we’ll give you two controllers: one for each hand. Double the fun. Double the intimidation.

Now, I know that the Nunchuk isn’t required for all games. But I suspect that a good chunk of games will support it or require it and certainly won’t be as fun without it.