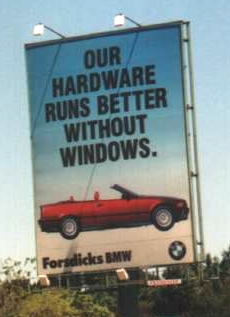 I’m a long time Windows user. Honestly, I think geeky-geeks, whether they admit it or not, are like me. They’ve always used a combo of Linux and Windows. Macs? Well, Macs are notoriously the machine for the artsy types. The designers. The artists.

Anyway, say what you want about Microsoft, but I got the vision to be a computer science guy when I first had to dive into DOS in Windows 3.1 to make some Michael Jordan basketball work. Let me tell you: I wore the hell out of CONFIG.SYS and AUTOEXEC.BAT. Squeezing every last ounce out of the available hardware resources. It was my experience with those files that turned me into a Nerd and a Linux user down the road.

So why do I say this? Well, first because I’ve gotta come clean and admit that I’ve been a Windows user through every iteration, even the WindowsSUCK (ME). Second, because I think that part of what makes a geek a true geek is his willingness to get down and dirty with the command prompt while tweaking system files. Learning the ins and outs of an operating system takes persistence and patience… and well, early Windows operating systems were the perfect environment in which one could be forced into situations that required patience and persistence.

And the concern is even greater with the upcoming release of Vista, which Microsoft is touting as the most user friendly, crash proof, straight out of the box, easy to use, operating system ever. What this means is that all those 10-12 years girls and boys that are just now getting into computer life will be totally immune to the pre-requisite struggles of geekdom. The recruiting base is disappearing…fading.

Some of you might say that my pre-requisite for deep-geekdom isn’t necessary. That plenty of geeks have emerged on the tide of Windows XP. And my response? You’re mistaking pseudo-geeks for the real thing. You’re talking about wannabe-geeks. The kind that only know how to code in GUI IDEs. The ones who only know PHP and look the other way when you mention C++ or Python. Or best of all, the ones who think they’re geeks because they can click an AJAX “digg it” button.

So my hypothesis stands. With the emergence of a generation brought up without the command prompt, system file struggle that’s necessary for initiation into Geekdom, we’re currently witnessing the slow death of a dying bread.