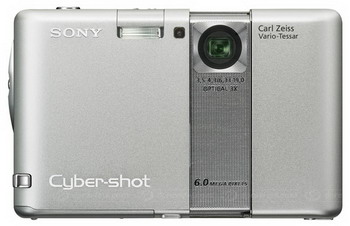 DPreview has a preview of Sony’s latest compact digital camera, the Cybershot DSC-G1.

The new models’ camera-to-camera wireless capability makes it possible to send your friends a photo at the push of a button. It’s also possible for up to four camera users to send each other photos in real time. With a DLNA-compatible PC, storing and sharing photos becomes simplified through wireless image transfer from the camera to the PC.

The G1 features a 6-megapixel CCD sensor, 3x optical zoom, and a large 3.5-inch LCD with 921,000 pixel resolution. All this in a 7.2 oz package (without battery). Another great feature of the G1 is the 2 Gigabytes of internal memory. That’s more than enough for a few days’ vacation or an all-nighter party. The G1 also has built-in photo organizing features, which can make the camera a virtual photo album.

However, Sony is highlighting the WiFi functionality as the primary selling factor for this camera. In my opinion, one of the weirdest features camera manufacturers have thought about is putting in WiFi functionality on their digital cameras. I mean, I’m quite old-school when it comes to transferring images from camera to computer. I prefer using the good ol’ memory card reader (rather than plugging in the cam itself). It helps save on battery life, and it’s faster, too!

However, I was surprised when a blogger friend of mine told me she would definitely go for a digital camera with WiFi or even Bluetooth so she can quickly transfer from her cam to her MacBook. This can be handy when liveblogging.

Still, I wouldn’t be too optimistic. ForeverGeek summarizes my disappointment: “it appears that the wireless function will only work for ‘Digital Living Network Alliance (DLNA)-enabled devices.’ I hope that the only necessity for the wireless communication is a specific software.” This means you can’t just expect it to work on any network or computer, and for compatible networks, perhaps some setup is still required.

Most manufacturers with WiFi-enabled cameras don’t give it to us that easy. Most would require you to use proprietary software or–even worse–proprietary networks. This means you cannot just sync your camera contents with iPhoto or any other photo management software, except for the one provided by the camera maker.

Still, there’s potential for this technology. Though I do hope that wireless syncing methods become standardized across platforms, without the need for proprietary software or services.