Swiss Army Knife slash MP3 player? Sounds weird, and dangerous, but it looks cool and if you think about it has some functionality to it.

This gadget from Victorinox is a fully functioning aluminium Swiss Army Knife, with a blade, scissors and nail file. The music section has a 1GB memory with the ability to play MP3/WAV/WMA; it also has a FM radio and digital voice recorder with built in microphone. Other features include a remote control, a jogging armband, USB extension cable, and a rechargeable Lithium battery.
The MP3 player requires no software, has a multi-language interface, supports Windows 2K/XP and Mac OS X, and measures in at 74mm x 22mm x 2mm 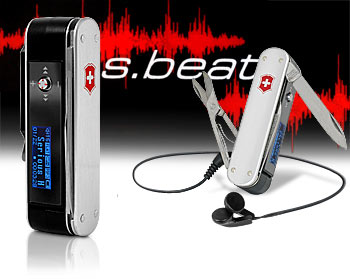