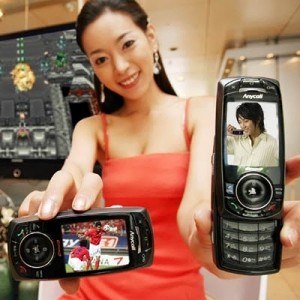 Samsung may not be going all N-Gage on us, but they’re still dipping their toes in the gaming space with their new SPH-B3200 DMB-enabled handset. The slider phone … has an 8-way d-pad and five dedicated gaming buttons, and the Bluetooth means you can hook up with others nearby for some instant multiplayer gaming action. Currently available in Korea only (through KTF), and for a hefty ₩600k KRW (about $631 USD).