What I love about entry-level digital SLRs are their prices and sizes. For an amateur photographer like myself, they’re advanced enough to play around with, but not too expensive to break the bank. And the size is just right–they’re usually smaller than their pro counterparts. I’m not one to lug around a big camera bag stuffed with various lenses and accessories most of the time. While I’m mostly a fan of Canon when it comes to their venerable Rebel lower-end D-SLR series, I can say Nikon has been coming up with quite a good set of their own to challenge the Rebel’s dominance. 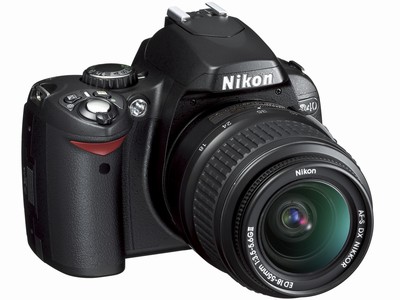 DPReview–one of our favorite camera review sites–has recently reviewed the new D40, and the result is quite surprising for an entry level camera.

The Nikon D40 is an all new affordable, compact, point-and-shoot digital SLR from Nikon, it follows on from the D50 but at a significantly lower price point and with a subtly different feature set. The biggest news however is probably fact that Nikon resisted the temptation to keep chasing megapixels (hooray for that) and instead appear to have concentrated on what makes a good camera, a decent viewfinder, short shutter lag, very short viewfinder blackout. They’ve trimmed some of the ‘less important features’ (you can’t change the exposure steps for example) but have squeezed a range of new features such as custom Auto ISO which we welcomed with the D80.
…
The D40 is perhaps one of Nikon’s most important digital SLRs. It’s certainly their smallest and lightest, their most affordable and ships with a fairly decent kit lens too.

Nikon focused (pun intended!) on the essentials, and did away with the “megapixel” battles. One thing you’ll miss, though is the onboard autofocus drive motor. So unless you’re using Nikkor AF-S or AF-I lenses (those with built-in focus motors), you’ll have to focus manually.

Still, we have only but kudos to Nikkon for releasing its smallest and most affordable D-SLR to date!