America drops the web over Memorial Day weekend. There is no question about that. Anyone who owns a website need only check her logs. Sharp drop-off. The biggest since the Christmas season.

Gadzooki took something of a break too. Barbecue, beer. Tuna Steak. Yep, that’s right. I ate Tuna Steak grilled in one of those massive grill smokers. Pleasantly surprising. Not like fish at all. Two thumbs up. Just make sure you marinade it right. 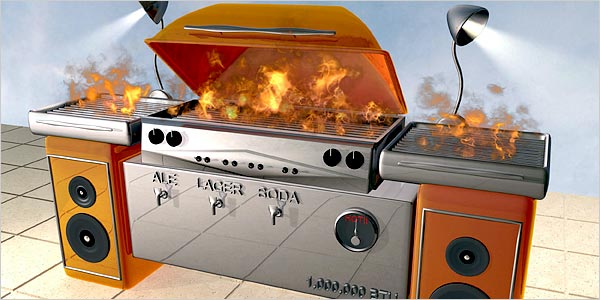 The lazy weekend is over. Back to work. Back to Tech. Let’s do a review in tech back to last Friday.

We’ve been covering motion sensing technology for a while now, and when new functionality becomes hot in tech, adoption comes quick. All of us computer geeks don’t have to rely on Wii for our motion sensitive fix. Taiwanese company Industrial Technology Research Institute has announced what it is calling the wireless flying mouse, which straps to your wrist and allows 3d motion control. Speaking of motion control: how about an alarm clock that requires you to play Simon before it shuts off. Nothing will get the late risers moving like a quick game of “repeat after me”. Or maybe it’ll be the other way around: maybe Simon will find himself in motion, crashing into the bedroom wall. For our Mac friends who are feeling motion detection envy, try out this Magic Wand Mouse for OSX.

Our Wii fascination never ends, and it now appears that one of the best new games out in years could be headed Nintendo’s way. You heard that riff right: Guitar Hero maybe headed to Wii. Woohoo. Now we can jam for 1/3 the price. But Nintendo can’t have all the glory. Microsoft’s XBox Live platform is now the number one platform for High Definition, On Demand Content. I’ve thought for a while that the first console system to nail it’s online platform would win the 2005-2009 console war. XBox certainly has the huge headstart, Sony doesn’t have a clue, and Nintendo will be playing comeback kid. Or maybe not. Looks like the preferred system for the 2005-2009 season is the XBox 360 + Nintendo Wii Combo.

Hey, want some cheap storage room for your MP3 files? Big storage, tiny form. Check out this nifty KINGMAX Super Stick 1GB Pen Drive – USB. Or maybe you’d like to pay the price of a new desktop computer for your very own Sprint Treo 700p. That’s with a 2 year agreement! Sprint, Verizon, Cingular and others might need to wise up. It turns out that most consumers are looking for nothing but a simple cellphone that’s easy to use.

Oh, before I’m done, here’s one piece of advice for all you tech-geeks / scientists / inventors. You wanna be productive? Then don’t get married.