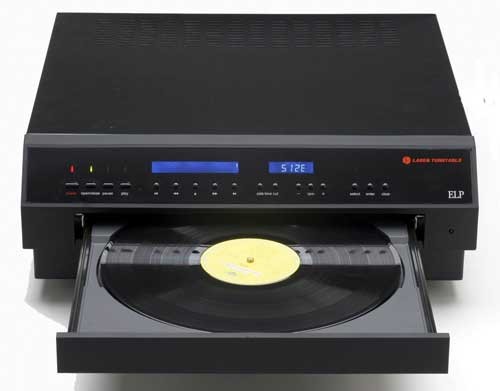 The ELP Laser Turntable lets you listen to your old school vinyl records without worrying a bit about mechanical damage. You see, old school vinyl players actually had to make physical contact with with the grooves in your vinyl discs, slowly wearing them down over time. With old discs, this causes concern for collectors and old timers alike. But the ELP Laser Turntable reads the grooves with lasers, fully preserving the surface integrity of the vinyl disc.

In fact, the ELP Laser Turntable can actually help regain some of the discs fidelity if it has been damaged or scratched, letting people listen to their long lost artifacts that they thought they had lost forever.

I’ve gotta confess that relative to vinyl, I’m a youngster. I seriously started flirting with vinyl records around the time Pearl Jam started proselytizing and selling vinyl discs of their stuff and playing it on their free radio shows. Then I went into my mom and dad’s huge vinyl collection and started getting schooled on Peter, Paul and Mary, The Beatles, CCR, Simon and Garfunkle and Led Zeppelin.

Pretty soon, I started falling in love with the character of vinyl records. The scratchy imperfections, the pops and spits. My major concern with the ELP Laser Turntable is that since it uses digital technology, I doubt it preserves the actual character of vinyl listening.

What would be truly cool is a digital laser device that sells for something like $500 rather than $15,000 and which could introduce a whole new generation to the distinct pleasure of old school vinyl listening. But for now, the ELP device will have to suffice for those who want to digitize, preserve and frequently listen to their old vinyl records.