The guys at InvisibleShield were kind enough to send us a media kit for their product along with product samples for the Nintendo DS (original) and iPod mini. The idea behind InvisibleShield is to non-intrusively protect your gadget screen (or entire gadget for that matter) from scratches. You know, those “All I did was throw the iPod in my backback!” kind of scratches. Hey, the product idea is simple, but definitely something we could use. 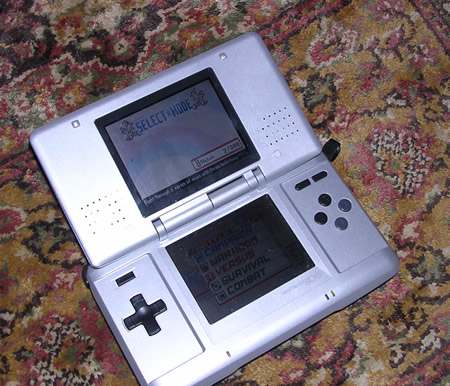 This Nintendo DS has an installed InvisibleShield on both screens

When the product first arived we were a little skeptical. Packaging claims of being invisible and invincible seemed a little far fetched. We were sure the product was being oversold (I’ve tried plenty of crappy screen protectors in my day with similar claims). To add insult to injury, the application process was more than three steps and required a 24 hour wait period. I had become very skeptical.

Guess what? InvisibleShield worked and it was worth the wait.

The first major thumbs-up I have to give to the InvisibleShield is its easy opening packaging. That may sound trivial, but I hate packaging that’s hard to get open. When I saw that it had one of those hard plastic packages, I thought to myself “Oh boy, not one of those.” But, to my pleasant surprise, the package opened right up, with the back snapping out of the front. Good move, indeed. I really do hate those plastic packages that have to be cut open. 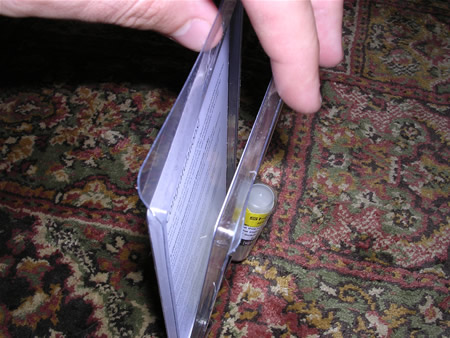 The InvisibleShield came perfectly form fitted for the devices I requested, a major plus.Couldn’t have asked for more precision here (but make sure to select the right shield for the right product). On the DS, of course there were two different sized screens. It did take a little effort to figure out which InvisibleShield went with which DS screen, but it wasn’t too difficult. Application was very easy and seemed almost effortless. You did have to spray a solution on both sides of each screen. Still not completely sure why, but I always try to follow instructions;-) I didn’t have to struggle at all to fit the screen into place. It just seemed to lay right into place the first time. Good thing, because I tried pushing the screen around just to see whether it was adjustable, but it hardly moved. Just as a precaution, one side of each InvisibleShield is semi-sticky so it’s important not to have dirty hands or else that grease will emerge as a fingerprint on your shield. 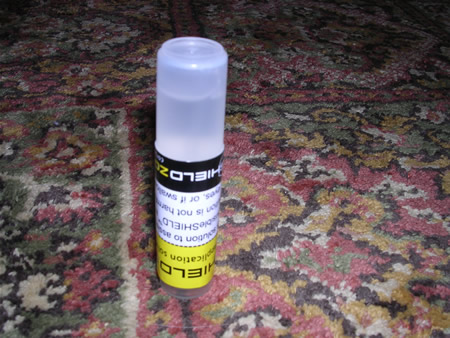 Ok. So after putting the InvisibleShield on my Nintendo DS I was initially frustrated because I saw air pockets. The literature said that the air pockets would remove themselves within 2-3 days, so I decided to get patient for once in my life. The patience payed off. 2-3 days later, the InvisibleShield truly was invisible. I couldn’t even tell that it was on my sytem unless I looked very, very closely. The touch screen on the DS still responded as well as ever, and I even played through a full afternoon of Advanced Wars without a hitch. I mean, I guess it’s a good thing that when I was done I double checked just to make sure I had really put the InvisibleShield on.

I decided to put my InvisibleShield to further test by rubbing the screen in the same place for over five minutes with my DS touch stick. Nothing. Then I got out a dime and started scratching. Nothing again. To my surprise, the no-scratching thing turned out to be true under my limited testing.

The iPod mini shield was “full body” armor. Whereas the DS just had protection for the screens, the iPod mini protected both long faces (back and front and sides) of the iPod mini. On the iPod mini, the invisibility factor wasn’t completely present. The lines at the edges were distinguishable to the non-discerning eye. Nonetheless, I was happy to sacrifice a little plastic lineage for an unscratched iPod case. To be honest, with the iPod, the case is probably a bigger concern than the screen when it comes to scratching, so it was very good to have full body protection.

Again, the installation went smoothly, though again I was impatient. The biggest trick with the iPod Shield is lining up everything so the click wheel shield is over the click wheel. Not too tough, but not as snappy as the DS either. Once the spray had been applied, and the shield lined up, I just ran over the shield a couple times with the included black plastic piece to get our most of the air bubbles. 24 hours later, the bubbles were almost completely gone and now, 4 days later, they’re totally gone. Patience is not my virtue, but this time it paid off.

Soon enough, I was back to using my iPod mini like normal. The iPod still had the same feel in my hand and the same tight control. And the cool thing is, now I don’t have to worry about throwing the iPod into my backpack or even into the same pocket as my keys. No scratches, no worries. That’s cool with me.

Ok. So there’s only one major worry that I have. In the literature that comes with the product, there are no directions for how to get the InvisibleShields off. Hopefully, I’ll never have to remove them, but right now, they’re on so solid that it doesn’t seem like they’d peel right up. I’m sure there’s an easy solution. I just feel that it should be in the product literature.

Hey you want one. I got one. Definitely check out the InvisibleShield. It’s worth it.