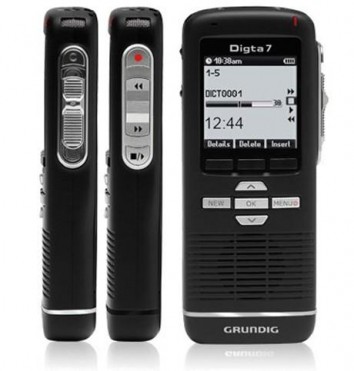 In this day and age, claims of being the first in anything is getting harder and harder. There are just so many things happening in the last decade or so that true innovations are getting fewer. Imagine someone saying that they’ve got something that is supposed to be the first of its kind in the world. You’d be doubtful at the very least.

But highly respected company Grundig is claiming that it has released something that is truly the first of its kind in the world. The Digta 7 Premium BT dictation service is being rolled out by Grundig with this rather lofty claim. But what does make this product the first of its kind? Well, Grundig says that it is the world’s first dictation device that comes with a Bluetooth module built into it. The addition of an established technology does seem a bit of a stretch. I can probably put Bluetooth in barrettes and call it the first of its kind (unabashed Big Bang Theory reference here) but hey, they’re the tech guys so this must really mean something. Apparently, with the Bluetooth connection a person can send his dictation from the Grundig device to a Blackberry, which can then be sent automatically to a computer. The Digta 7 Premium BT Dictation service can transmit dictations in the following formats – DSS, DSSPro and WAV, which are the most popular dictation formats.

Blackberry seems to be an important part of this solution as Grundig is preparing to release a Dictation Blue app that will be made available to Blackberry devices. The app will be instrumental in routing dictations through the Blackberry email client. Of course, one thing that should be considered with this wireless connectivity is the distance of transmission. Bluetooth is only effective within a range of 15 to 30 feet with obstacles affecting that effective range.