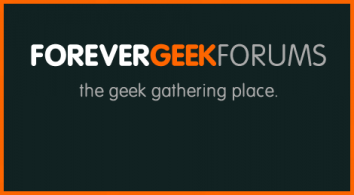 Geeks have indeed inherited the earth, and their playground is the internet.

The internet is the place for geeks of all persuasions to meet up, exchange information and news and make their opinions heard about the latest and greatest in the geek world. And one virtual geek marketplace of ideas has recently opened at ForeverGeek. The venerable web site of all things geeky has officially opened a forum where fellow geeks can congregate and meet other like-minded individuals.

Gadget geeks are probably the most recognizable geek type. They’re the ones who knows which latest gadgets are coming out, what the specs are and actually try to get them first before others catch on. But more than the gadget lust, gadget geeks actually know the innards of their gadgets and now the technical side of things and know how to tweak the gadgets to make them run more smoothly or efficiently. ForeverGeek offers the kind of content that gadget lovers will surely appreciate. The latest news, great gadget guides, gadget reviews and various how-to articles to really exploit the latest electronic gadgets in the market. And when I say gadgets, it’s not limited to just the fancy-schmancy electronics appliances – expect to find coverage for cool toys and even game consoles, topics that are also close to the heart of the typical gadget geek. If you need more information or help for a gadget that you’ve recently acquired then the ForeverGeek forums is the place for you to find other gadget geeks who may be able to help you with your queries. The ForeverGeek forum is going to be a community of geeks that run by geeks themselves. You’ll feel right at home.