James Bond has had a lot of cars in the 20 plus installments of Bond movies through the years. These come from various manufacturers, like Aston Martin, Bentley, BMW, and others like Jaguar, Ford, Saab, GM, and others (including cars driven by either allies or villains). However, the most popular is the Aston Martin DB5, even though it has only appeared in the Bond franchise five times, in Thunderball, Goldfinger, Goldeneye, The World is Not Enough, and Casino Royale. 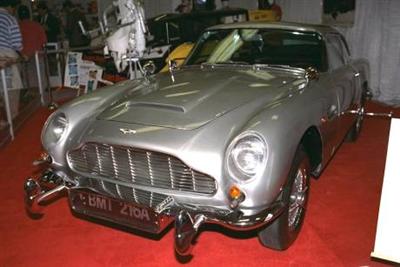 Through the years, Bond’s DB5 has been upgraded to match the current model. The one pictured above, for instance is the model used by Sean Connery’s Bond in 1964 Goldfinger.

Of course, Bond cars shouldn’t be without the usual high tech gadgetry provided by the Bond character Q (and subsequently R, or the “new Q” when Desmond Llewelyn’s Q passed on). These include bullet proof body panels, oil slick, smokescreen, hood and trunk-mounted machine guns, rotating license plates (that change the license plates automatically at a press of a button), telescoping tire slashers, tracking devices, and of course a passenger ejector seat. Later on, other refinements were added, such as rocket launchers and hood mounted target-seeking machine guns.

The DB5 had also been fitted with an invisibility device, or actually adaptive camouflage, in 2002’s Die Another Day (pictured above). This lets the car disappear from sight by projecting the exact image that is at the opposite side of the vehicle. The DB5 V12 actually had the moniker Vanquish but Q preferred to call it the Vanish because of this feature.