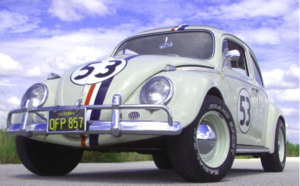 Another car I consider to be famous, particularly in fiction, is Herbie. Though it’s not as intimidating as the Batmobile, loaded as the Ecto 1 or technologically advanced as K.I.T.T., Herbie sure holds his place in the hearts of film and auto aficionados.

Herbie is a Volkswagen Type 1–more commonly known as “Beetle” or “Bug.” “He” is portrayed by a 1967 L87 pearl white Deluxe Sunroof Beetle. Herbie often sports the #53 racing number, and he has been a racing Beetle in most of the films he appeared in.

In most of the Herbie movies, Herbie was a racing Beetle. Beetles are commonly used for drag and even circuit racing, particularly because of the easily-modifiable and -replaceable engine. However, what set Herbie apart was that he had a mind of his own. He wasn’t like other television cars who talked, though. Herbie simply acted and moved on his own accord, but did not necessarily “talk” with people. He could drive unlike any racecar driver can, and Herbie often executed unbelievable antics like driving on ceilings, walls, and even jumping over (or on top of) other cars.

Unlike other cars with “intelligence,” one thing sets Herbie apart: he can fall in love. It’s evident in most (if not all) of Herbie’s movies that some other cars also had minds of their own, but did not overtly show this like Herbie did. And in many cases, Herbie falls in love with other cars, such as a Lancia Monte Carlo and even a New Beetle.