We just couldn’t resist posting about this. Was there every a time in your life you needed to really delete data such that it would never be recovered? Ever? Say, you’ve downloaded a ton of MP3s illegally, or you’ve just designed the ultimate weapon of mass destruction. Pretty soon the authorities will be knocking down your door and seizing your equipment.

Don’t you wish you could make like Bart Simpson and say “I didn’t do it. Nobody saw me do it. You can’t prove anything.”

Well, with the Fujitsu Mag EraSURE P2V, you probably can. From Engadget, 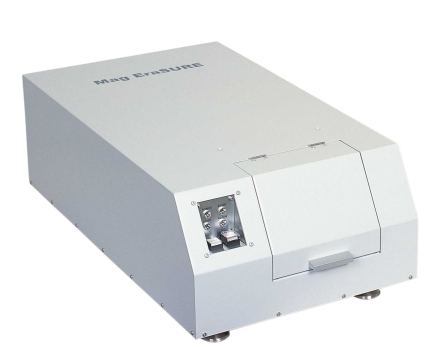 Fujitsu … has just released a semi-affordable degausser called the Mag EraSURE P2V that lets you cover your digital tracks by exposing your drives to a powerful, bit-killing magnet. Actually this $13.000 version of the company’s high-end EraSURE P2E is meant not for aiding criminal geniuses, but for enabling security-conscious firms to permanently remove data from hard drives, backup tapes, floppy disks, and the like. Plus, since Fujitsu only promises protection against commercial recovery methods, its probably still best to destroy drives used for illegal activities the old-fashioned way, by tossing them into a wood chipper.

Okay, so the authorities might have something more sophisticated than simple commercial data-recovery tools. So the best way to destroy your data would be to physically destroy the storage media itself. Better still, it’s probably best if you don’t deal with incriminating data in the first place!

From the Fujitsu press release,

The Fujitsu Mag EraSURE family of products utilizes a rare earth permanent magnet to degauss magnetically recorded information. Data becomes permanently unrecoverable by commercial means once exposed to the powerful magnet in the device. In addition to purging recorded information on the storage device, including servo and calibration data, the degausser
also destroys most read/write heads.

So you’ll be destroying the entire drive itself. Well, it’s probably all right. If you can afford a $13,000 eraser, then you probably can afford to buy a decent-sized hard drive several times over.