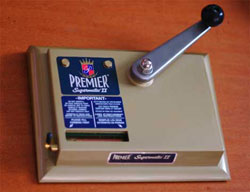 You’ve probably heard about it by now – cigarettes and other “sin” vices are being taxed more and more in various states across the country. This is not surprising as legislators have always had these products and activities in their sights. What is really crazy is the fact that in some places, cigarette prices can go as high as $10 per pack!

It is no wonder that smokers are looking for alternatives to manufactured cigarettes. One interesting gadget that just might prove to be the smoker’s savior: the Premier Supermatic II cigarette injector.

Alternatively, you can get cigarette rolling machines. While the end result is basically the same, the method is quite different. Instead of getting a paper tube, you use sheets or leaves of paper, called cigarette wrappers. You have to use a rolling machine for this. Naturally, you will also need tobacco to put inside the wrapper.

Whichever method you choose, the results are the same: you have your own cigarette, which costs much less than manufactured ones. Indeed, instead of paying about $10 per pack, you could end up paying less than $3 for a pack! Isn’t that such a sweet deal?