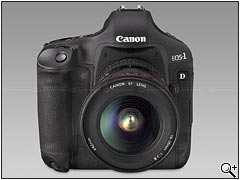 Canon continues to excite photographers, professional and enthusiast alike. Recently, the company announced the EOS-1D Mark III, meant for professional use. And it’s said to have been conceptualized from ground up (not just an upgrade from its predecessor, the Mark II N). The Mark III has a 10-megapixel APS-H CMOS sensor that can shoot up to 10 frames per second. The camera features dual DIGIC III processors. Imagine, dual-processors are not only popular in computers, but also in cameras, too!

The EOS-1D is the fastest digital SLR in the world today.

DPReview has a preview.

Canon’s dual “DIGIC III” processors deliver unprecedented levels of speed, responsiveness and image quality. Ready to shoot within 0.2 seconds of power on, the EOS-1D Mark III can capture and process over 100 Megapixels of image data per second, rapidly clearing the image buffer to allow up to 110 frames in one burst. Images are processed at 14 bits for a total colour depth of up to 16,384 tones per pixel, compared to 4,096 tones from 12 bit images.
…
Canon has redesigned its auto focus system to include 19 cross-type sensors with sensitivity up to f/2.8, spread out across the AF area to better accommodate off-centre subjects. An additional 26 AF assist points are used to aid AF tracking for improved accuracy.

Responding to professional photographer requests, a dedicated AF button on the back of the camera allows users to instantly switch auto focus on or off while keeping their eye on the viewfinder. The viewfinder is now brighter and offers a wider angle of view. The camera’s new 63-zone metering system gives photographers greater level of control over exposure.

Among the highlights of the Mark III is the new live preview feature, which is not very common among D-SLRs. This lets the user frame photos using the LCD instead of the viewfinder. SLRs usually relay the image from the lens directly to the viewfinder by use of prisms or mirrors–that’s why they don’t usually let users see a “live” image on the viewfinder. While most SLR users will find this strange, this is actually helpful, especially when taking photos at difficult angles (imagine having to twist your body accordingly just to get that perfect shot).

The Mark III has other features that are already standard with this type of camera. This includes self-cleaning for the sensor, which minimizes dust (a problem encountered when you frequently change lenses). There is also an in-camera dust removal system, which removes speckles caused by dust and lack of adequate lighting.