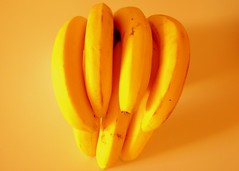 At Gadzooki we think that the biggest tech innovations over the next century will be directly tied to energy. That may be wishful thinking, but we love the prospect of there being a decentralization of energy.

Ultimately there are two goals we’d like to see reached regarding energy innovation. First we’d like to see control of energy put into the hands of the individual citizen! Empower the citizen to create his own (clean) energy. Second, we’d like to see the emergence and dominance of alternative, renewable energy sources.

One of the great things about alternative, renewable energies is that they allow for the development and decentralization of small-footprint plants near the renewable source. As an example, ethanol plants are popping up near large corn farms. One of the benefits of the decentralization of energy is that less energy gets wasted in the transport.

Well, it was with great joy that we read this fantastic article about the use of banana waste to produce energy in a methane plant. Bananas are an extremely fragile fruit and upwards of 30% of any crop is considered waste. So, an Australian government agency has awarded a grant for the development of a banana based methanol plant.

There is no way to know whether this sort of project will be economically viable, but kudos the Aussies for trying!