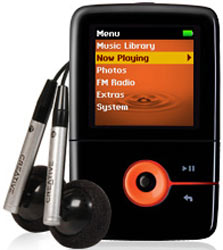 Move over, iPod afficionadoes. Whether it’s cheapo MP3 players or the next super high tech media player from Archos, this site on anything but iPod has it.

Perhaps you’ve been wondering about the dominance of the iPod as the digital music player of choice. Why exactly is the iPod popular over other brands, say Creative, Archos, iRiver, and others? Is it the interface? Is it the cool Apple brand? Is it because they’re more expensive (there is such a concept in economics where the demand for some goods simply rises along with the price) and are hence more ideal to own than other brands?

So what’s the benefit you get from the premium you pay for an iPod? Most would say it’s the interface. Apple is known to design very usable and practical interfaces. Here’s where Mac OS beats Windows anytime. For many it would be the design. I mean, get an iPod Nano and set it alongside, say, a Creative Muvo, and you would be blown away by the elegance of the Nano. Never mind that the iPod doesn’t tune in to FM, nor can it record your voice.

So what does Anything but iPod have to say about the iPod?

Apple makes a half decent mp3 player. I own or have owned several different Apple MP3 players. However, I feel that there are better choices available. There are other MP3 players out there that are easier to use, that give you more for your money and still have style and class. The problem is many people do not know what else is available. I talk to many people that think an iPod is their only choice. This is why this web site was started, to show people their alternatives and to educate them so they are able to make their own informed decisions.

So there are alternatives after all, and these alternatives give us, consumers, a better choice for the simple reason that iPods will only work with iTunes, and vice-versa. You cannot sync with music from another music store (unless the tracks are in raw MP3 format). And you cannot use iTunes with a music player aside from an iPod. Talk about monopolies–they’re even better at it than Microsoft!

So what info do we get from this nifty site? We have reviews and news about non-Apple branded music players. Here’s one of the latest, on the Creative Zen V and V Plus.

Creative will be releasing two different models the V and the V Plus. The Plus will add FM radio and video. Both of them will feature all the features familiar to the Zen line and will add line-in recording.

Creative once again complicates their Zen product line. They have a great brand but they are slowly destroying it by spreading it too thin. Regardless, it will probably turn out to be a pretty good MP3 player.

Pretty straightforward, if you ask us. The point is, there are indeed other alternatives to iPods. We do have a choice. However, due to design issues and possibly peer pressure, the iPod is still the player of choice for most. After all, an Apple is an Apple is an Apple!