There were many interesting things to discover and enjoy at this year’s D conference, D5. One such example was Microsoft Surface. But surely the biggest highlight of the event was the interview with Bill Gates and Steve Jobs for the first time in twenty years. 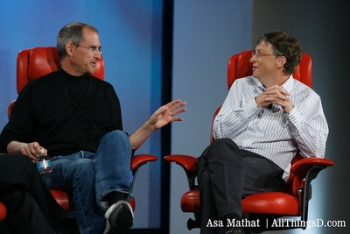 Before turning into the two icons representing the two biggest rivals in the computer industry, Bill and Steve were first and foremost pioneers and visionaries whose work catapulted them and their companies into great success. D5’s interview quickly reminds us to cease the hostilities if at least for one night, and simply be in awe of their presence.

Kara: So let’s get started. I wanted to ask, there’s been a lot of mano-a-mano/catfight kind of thing in a lot of the blogs and the press and stuff like that, and we wanted to–the first question I was interested in asking is what you think each has contributed to the computer and technology industry, starting with you, Steve, for Bill, and vice versa.

Walt: Bill, how about the contribution of Steve and Apple?

What Steve’s done is quite phenomenal, and if you look back to 1977, that Apple II computer, the idea that it would be a mass-market machine, you know, the bet that was made there by Apple uniquely–there were other people with products, but the idea that this could be an incredible empowering phenomenon, Apple pursued that dream.

That’s not even half of it. Imagine dropping everything else for that occasion just to reminisce. Stories of how Bill and Steve worked together were essentially tributes to each other’s achievements—some even complementary to each other. Apple asked for Microsoft’s help in adding floating point support to the Apple II BASIC, which it lacked. Bill got paid $31,000.

Soon Microsoft would create software for the Macintosh to penetrate the Lotus-dominated industry. The graphical user interface (GUI) would debut, Apple would survive the slump, Steve Jobs would return, and Windows 95 would become a hit.

Bill: And since that time, we’ve had a team that’s fairly dedicated to doing the Mac applications and they’ve always been treated kind of in a unique way so that they can have a pretty special relationship with Apple. And that’s worked out very well. In fact, every couple years or so, there’s been something new that we’ve been able to do on the Mac and it’s been a great business for us.

Steve: And it’s actually–the relationship between the Mac development team at Microsoft and Apple is a great relationship. It’s one of our best developer relationships.

These days, the Microsoft Zune is going head to head against the Apple iPod, but there’s more. Bill confirms he used Macs to develop software for the Xbox 360 during its early years. “And we never ran an ad on that,” quips Steve.

They go on to infer what computers will be like in five years. Which form factors work and which won’t? Bill still believes in his tablet PC despite its relatively low popularity, as well as several other screen sizes that won’t necessarily compete with one another: you still won’t want to edit your homework or edit a movie on the screen of that size. And so you’ll have something else that lets you do the reading and editing and those things. Steve brings up Google Maps on the iPhone as a great example of an application that works much better on a specialized client (rather than the broweser). Phones and iPods will become post-PC devices.

The interview goes further to cover their thoughts on the Internet, entertainment, and even 3D. At this point Steve Jobs has kept mum about the Apple products that are still under wraps.

Walt: Bill discusses all his secret plans. You don’t discuss any.

Steve: I know, it’s not fair. But I think the question is a very simple one, which is how much of the really revolutionary things people are going to do in the next five years are done on the PCs or how much of it is really focused on the post-PC devices. And there’s a real temptation to focus it on the post-PC devices because it’s a clean slate and because they’re more focused devices and because, you know, they don’t have the legacy of these zillions of apps that have to run in zillions of markets.

And so I think there’s going to be tremendous revolution, you know, in the experiences of the post-PC devices…

I could go on and on and on, but this post won’t do the whole interview justice. You can read the full transcript and the live coverage notes, but do yourself a favor and watch the videos for the real experience. Teasers can be found here, as well as the rest of the clips.

And here’s the answer to perhaps the biggest question of the night, “About your relationship. I mean, you’re obviously going to go down in history–history books already say it kind of thing. But what’s the greatest misunderstanding in your relationship and about each other? What would you say would be–this idea of cat fight? Which one of the many?”

Steve: We’ve kept our marriage secret for over a decade now.

Steve: No, that wasn’t my answer. You know, when Bill and I first met each other and worked together in the early days, generally, we were both the youngest guys in the room, right? Individually or together. I’m about six months older than he is, but roughly the same age. And now when we’re working at our respective companies, I don’t know about you, but I’m the oldest guy in the room most of the time. And that’s why I love being here.

Steve: And, you know, I think of most things in life as either a Bob Dylan or a Beatles song, but there’s that one line in that one Beatles song, “you and I have memories longer than the road that stretches out ahead.” And that’s clearly true here.

And that got a standing ovation. Well done, you two.

Now you have the chance to not only read online books but you can rent textbooks or access any PDF file you download.