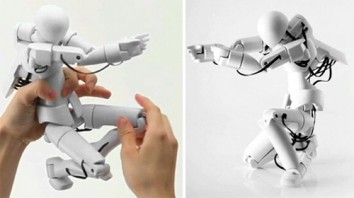 Japan-based SoftEther has released the QUMA for use by stop motion animators. The device consists of a small puppet that is spiritually similar to the wood mannequins artists use for posing when they want to draw the human body. But the difference here is that the QUMA mannequin’s joints are equipped with sensors.

This is how the QUMA works.

The mannequin is plugged into a PC through a USB port. Moving the mannequin will trigger the sensors, which detect when it is moved or adjusted. These data is then sent directly to the PC and interpreted by the 3D software. The QUMA significantly simplifies the whole process of stop motion because it eliminates a number of processes. Now, movements are directly put into the computer, which makes everything faster. The QUMA is also a great tool for traditional stop motion artists to slowly transition to computer generated or CG animation. The opportunities the QUMA opens for both traditional and CG animators is quite many and the whole animation industry is going to vastly benefit from it. The number of hours the QUMA can cut in production can translate to very significant savings, in the millions in fact for big budget major studio films. And if the price point is attractive enough (no price has yet been announced) this could open doors for backyard animators to produce sleek and polished stop motion animation from their homes.