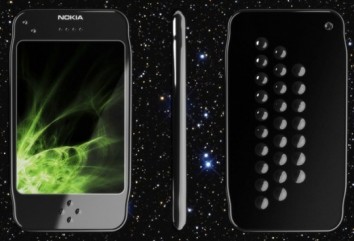 Does anybody here remember the Nokia N-gage? Not a lot of you, I’m sure. The N-Gage didn’t really make much of a splash when it first came out, which is sad, because it was way ahead of its time. Back then people scoffed at a gaming phone. I did too. The hardware available back then wasn’t really good for running games, and there wasn’t really a bunch of games you can actually play on the N-Gage platform.

Nokia’s taking another shot at the mobile gaming market with the Ovi Orion. The Ovi Orion is still conceptual as of now, and in theory, it looks like a good gaming phone.

The Ovi Orion doesn’t abandon usability in its race to be a gaming device. We’re not entirely sure of the everyday usability of a QWERTY keyboard (and hidden one-line display) mounted on the back of the handset, but it certainly makes more sense than trying to squeeze a tiny numeric keypad on the fascia somewhere. With the rise of responsive capacitive touchscreens, meanwhile, users are more confident with the idea of non-traditional gaming interfaces.

Now, Nokia would only need a Snapdragon or any other similarly-powered processor slapped on this, and this looks like a great deal. Check out the video below to see how the Nokia Ovi Orion (technically) works. Personally, if Nokia wasn’t killing the N-Gage line, it would actually be a great device to revive the dying brand. I know they’re trying to go Ovi everywhere, but it could’ve worked for the line.